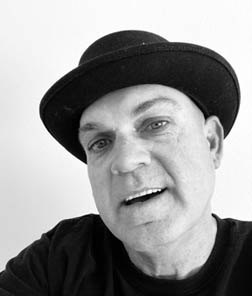 Robert Erb was born 1970 in Newport Beach, California. At the age of five, Robert and his family moved to Los Altos, California where he attended school and won his first art contest. His piece, a clay mosaic/painting, was displayed in front of his grammar school for over 30 years. Robert continued to draw, paint and explore new mediums to express subject matters about fantasy, abstraction and humanity. He continued to enter art contests and placed several times throughout his early education.

San Diego State University is where Robert discovered his passion for oil painting. It was at this time Robert began to study the great masters, Pablo Picasso, Georges Braque and the period of Cubism. Seeing objects from different viewpoints, breaking them down and adding clever color scheme, Robert developed a fresh style, with contemporary subject matters. Some of Robert's subject matters include musicians of several kinds of music, dance and political issues. Robert explored new mediums including acrylics and watercolors, and three dimensional additions. He also explored how the painting was framed and hung.

Robert has lived in San Diego, Santa Cruz, San Francisco and San Jose. He now lives in the Bay Area and continues to paint every day.